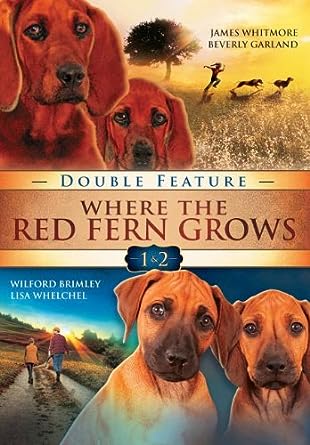 I love dogs and when there’s a movie, specifically a Christian movie about dogs or involving dogs somehow it’s one I have to check out. This Christian DVD is a combo pack which includes the first movie of Where the Red Fern Grows and the sequel.

Where the Red Fern Grows is about a young boy who constantly listens to his grandfather and tries to save up money to buy two raccoon hound dogs. The sequel tells the story of a dying man and how he thinks two dogs will help the healing process for his grandson, a traumatized WWII veteran.

At the beginning of the Christian DVD Where the Red Fern Grows we meet Billy Colman. He loves dogs and wishes he could have one but his family sadly cannot afford one. Then his father informs him of a dog that is available, Billy goes out to see it but somebody buys him right in front of Billy which devastates him. Billy is convinced that he won’t be able to purchase a dog but his grandpa tells him that he has to earn money to have a dog. His grandpa also tells them that even though having a pet Is a lot of work it is worth it in the long run. So after hearing this Billy begins working in several jobs just to have enough money to buy a dog but soon gets enough money to buy two. Billy from Where the Red Fern Grows orders to dogs and they are set to be delivered 30 miles from where he lives so he sneaks out of his house one night to get his dogs. No this is the start of an adventure.

After obtaining his dogs and on his route home a cougar appears, which ultimately scares him but he builds a fire to make the cougar go away. After this incident, he decides to name his dogs Ann and Dan. At home Billy from the Christian movie Where the Red Fern Grows begins training his dogs to be hunting dogs, always making sure to train them well. Because it was hard work with them is does become quite famous for their skills but other hunting dog owners start to get jealous. One of those owners is Ruben Pritchard who owns a dog named Old Blue. And soon in this Christian movie Old Blue gets loose and begins fighting with Billy’s dogs. Ruben follows the dogs with a hatchet trying to injure Billy’s dogs. Billy comes in and makes Ruben trip and ultimately he falls on top of the hatchet and he’s killed. Since boy new that Ruben stuff was kind of his fault he decides not to hunt. But his grandpa convinces him to enter a coon-hunting contest. During the contest, Dan and Ann are doing really well and seem to be winning but when Billy notices that his grandpa isn’t seen anywhere, he gets worried. So he takes the dogs out of the competition and onto the search for his grandpa. Billy manages to rescue his grandfather who had suffered a fall and had sprained ankle.

I love how these two stories take us on Billy Colman’s journey as we see him from his childhood into a young adult. Also, these two movies show the importance of healing it and also the importance of animals specifically dogs. How dogs have the sense and offer unconditional love for anybody who needs it.

Here are other Christian Family Entertainment films you can check out:

When Calls the Heart (WCTH) Season 4, Movie 3 – Heart of the Community

Chronicles of Narnia: The Lion the Witch and the Wardrobe