VeggieTales: Saint Nicholas A Story of Joyful Giving – Let’s give this Christmas! 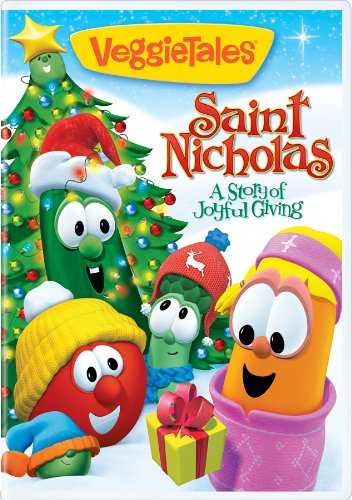 What a great combination, VeggieTales, and a Christmas story! This specific Christian movie called VeggieTales: Saint Nicholas A Story of Joyful Giving is the third Christmas special Big Idea Productions released. I love how VeggieTales always incorporates the fun aspect in a story like funny characters, and different wacky situations the characters get into but it also incorporates lessons for children to learn from and also it always has a message of faith for kids to hold onto in their own lives.

VeggieTales: Saint Nicholas A Story of Joyful Giving is about how when Laura Carrot’s dad loses his employment near Christmas, Bob the Tomato tells Laura and other Veggie friends a story where using their imagination they travel to ancient Greece and meet Saint Nicholas where they learn about the beauty of giving.

The story from this Christian movie begins in town where all town members are quite happy that Christmas is very near like, for example, Junior Asparagus is extremely happy after receiving some coins from some special family members. Next, we see Laura Carrot and her dad and his delivery truck has broken down. They try to go to Gus to repair it but to no avail. Both Carrots are extremely sad since Laura’s dad will lose his job and they won’t be able to buy a Christmas tree. Junior Asparagus and Bob the Tomato are nearby and Junior suggests that maybe Santa can fix it and help. Bob doesn’t think it will happen so he chooses to tell the story of Nicholas right there in the town center.

Everyone in this Christian DVD is transported to ancient Greece and find a little boy named Nicholas who lives with his parents, a happy family. The boy’s parents always take the time to help others and quite frankly the boy didn’t understand why. Later on, Nicholas is with his father fishing at the pier when one of the employees there was just fired by Gustav. Nicholas’ dad felt compelled to give that man some of his fish to help. That same night, Nicholas’ parents are informed of someone who is ill and they both decide to go and help. Nicholas is worried that something will happen and soon he discovers his parents passed away from the illness that was going around. Nicholas was suddenly an orphan but with the wealth of what his parents left him and his servant, Octavius.

Nicholas wants to maintain what his father used to do of giving fish away to those in need but Gustav planned to have all the fish taken away so Nicholas wouldn’t have enough to give to people. Because he didn’t have enough for everyone, he runs away to a ship and sails off to Bethlehem. There he sees where Jesus was born and a nun there explains to him the great thing that is being of help to others. After being in Bethlehem for a while, Nicholas returns home and finds out Gustav is actually running it. Octavius and Nicholas decide to continue helping others without Gustav knowing so they sneak fish inside their clothes. Also helping others are the daughters of the employee Gustav had previously fired who are giving away toys but soon they are caught by his evil henchmen. Because of this Gustav threatened them to pay three gold coins or be put in prison. Nicholas and Octavius plan to get the girls out but it was quite a difficult task since Roman guards were everywhere. They decide to dress up in disguise but things get somewhat complicated as they’re almost caught. At the end, they both could save the girls and everyone was thankful to Nicholas for the brave thing he’d done.

Back in town with Larry and Bob of VeggieTales: Saint Nicholas A Story of Joyful Giving, Junior Asparagus really wants to help Laura Carrot. So he decides to go to Gus’ repair shop and gives him his gold coin so he can fix Laura’s dad’s delivery truck. Gus is not very happy to only receive one coin but other people from the town pitch in with coins. Also, Larry and others decide to get a Christmas tree for the Carrots. By seeing all this good headed their way the Carrot’s are so happy that their truck is fixed AND they have a Christmas tree.

This Christian movie for kids about Christmas reminds them of what’s really important during the holidays, to give & help others. That although it’s lovely to receive, it’s great to give.

For more Children’s Movies like this Christian movie, check these out!

Greatest Heroes and Legends of the Bible: The Nativity DVD

VeggieTales: Lettuce Love One Another DVD