The Chronicles of Narnia: Voyage of the Dawn Treader – Lucy and Edmund Pevensie return! I love the Chronicles of Narnia movies ever since the first one, The Chronicles of Narnia: The Lion, The Witch, and the Wardrobe came out. I actually wrote a bit about this specific movie and you can find it HERE. I’ve just always loved the magic and grandiosity of the world of Narnia and Aslan himself. I’ve also loved all the analogies between the world of Narnia and the Kingdom of God. So if you haven’t seen these movies, I advise you to go check them out, in order if possible. Now although this third installment doesn’t include all the Pevensie siblings, the film is pretty great and I hope there will be more Narnia films coming in the future.

The Chronicles of Narnia: Voyage of the Dawn Treader is about how Lucy and Edmund Pevensie return to Narnia and help King Caspian in his journey to save seven lords and rescue the land of Narnia from an evil that is looming on a dark island.

This story takes place a few years after what occurred in the second film The Chronicles of Narnia: Prince Caspian and this time Edmund and Lucy are the Pevensie siblings we encounter. They both are staying with their obnoxious cousin named Eustace Scrubb until the war ends, therefore, are separated from their two older siblings Peter and Susan. One day the siblings notice that the painting of a ship at sea in the room they’re in begins to be animated. Water begins coming into the room and Lucy, Edmund and Eustace are transported to a Narnian sea. They’re saved by Caspian who is onboard and in charge of the Dawn Treader. He explains the journey he needs to go to rescue the seven lords of Narnia his uncle Miraz had banished beforehand.

They stop at the Lone Island, both Caspian and Edmund are imprisoned and Lucy and Eustace are sold as slaves. While imprisoned, Caspian finds one of the lords who’s imprisoned as well and that’s where he learns that the slaves are not to be sold but offered as a sacrifice to the green mist. The group is rescued by the crew from their ship and lord Bern, the one Caspian found imprisoned, gave Caspian the sword given to him by Aslan himself. They all, later on, arrive in several other islands where they’re informed in one of them that they’ll be tempted and tested in several forms.

At one point in The Chronicles of Narnia: Voyage of the Dawn Treader another sword is found in a magical place where everything turns into gold. There curious Eustace finds a gold bracelet among a sea of treasure and steals it. Now back to Caspian, he finds an additional sword and notices that Eustace is missing. Suddenly a dragon approaches them and they all jump into the Dawn Treader but the group suddenly realizes that the dragon is, in fact, Eustace who gave into temptation. Among Caspian’s ship crew is Reepicheep, a brave and friendly mouse who befriends Eustace. This causes an impact on Eustace’s life and heart.

Finally, the group arrive at Aslan’s Table and find three of the lords sleeping. As they put all the swords on the table they notice that the seventh sword is missing. Had they made the trip for nothing? But a star comes down from the sky and transforms into a glowing woman who leads them to where the seventh sword is located. Meanwhile, on the ship, Edmund’s fear is revealed as a sea serpent so now there’s another problem for him and the rest of the group. Eustace in form of dragon tries to fight the sea serpent but is suddenly injured. Aslan appears to him and transforms him back to human form. The group achieves to get all the swords and with its powerful magic defeat the evil mist and sea monster. 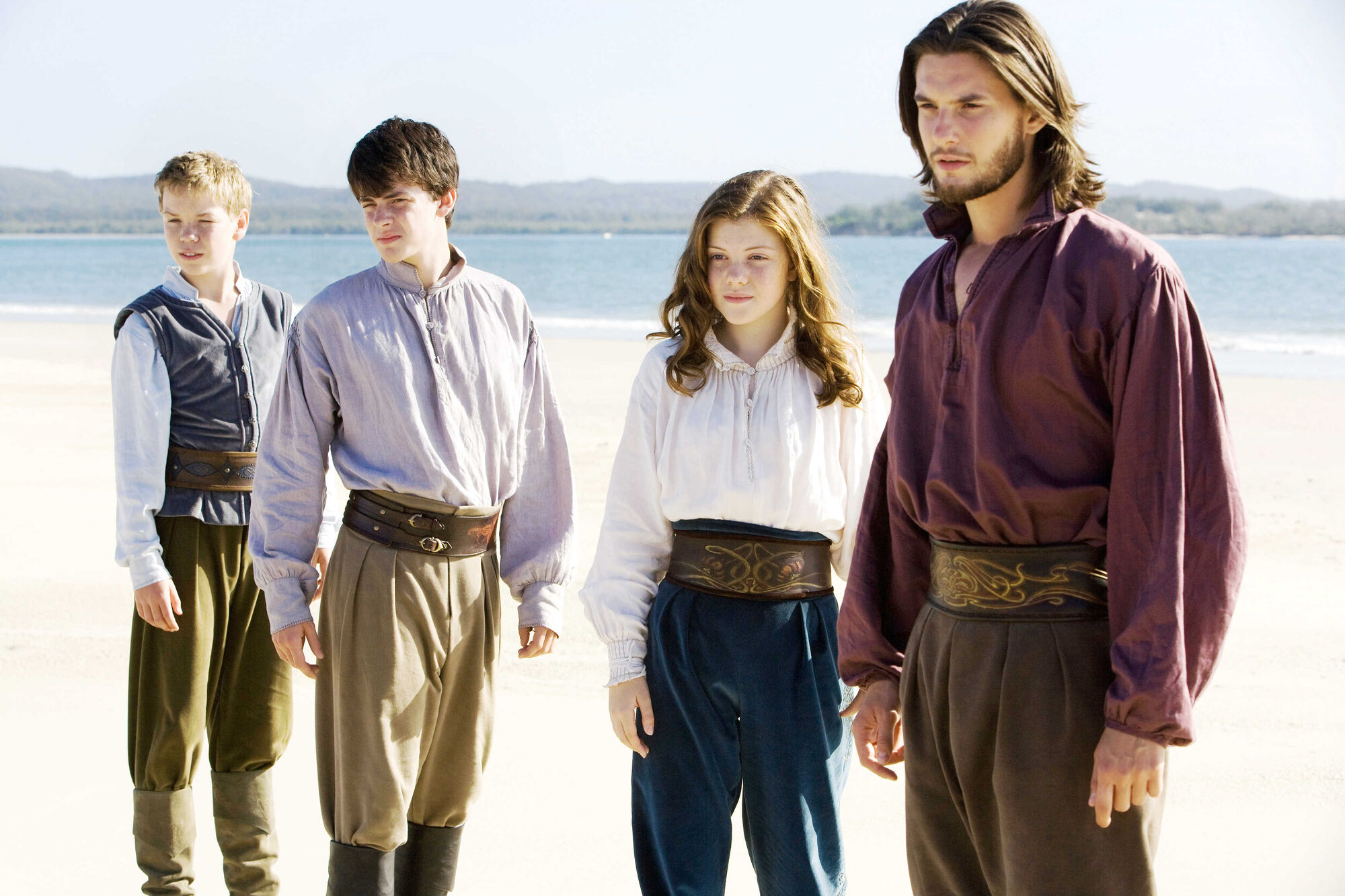 Back in the Dawn Treader, they sail to a shore where Aslan appears. He informs both Lucy and Edmund that they cannot return to Narnia since they have grown up but Eustace can actually return. Now, this is one of my favorite parts, Aslan encourages the Pevensie siblings to get to know him in heir world but there he’ll have another name. This makes me think of how what he referred to as his name in their world would be God or Jesus.

The Chronicles of Narnia: The Lion, The Witch, and the Wardrobe DVD