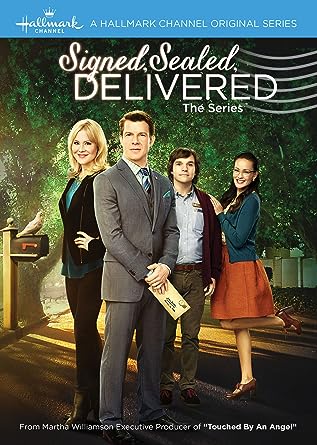 After the first movie that started it all which aired in the Hallmark Movies & Mysteries channel, a series was made to follow up on the characters that we immediately loved in the Signed, Sealed, Delivered movie. Signed, Sealed, Delivered The Complete Series is about the continued story of four postal detectives that take on cases of undelivered letters and packages. In this Christian DVD, first, they find the person who the mail was supposed to be for but didn’t receive it. This task is quite difficult and every letter or package takes these four detectives on a journey filled with adventure and sometimes a little drama. Even though it’s not a simple job, Rita, Norman, Oliver, and Shane help solve mysteries, crimes, reunite people with loved ones and changing the lives of people.

Let’s talk a little bit about these four main characters, shall we? First in Signed, Sealed, Delivered The Complete Series we have Oliver O’Toole, the leader of the postal investigation team. Oliver is very intelligent, loves being involved in this kind of detective work and is a great example of leadership. He has a good heart and after solving a mystery is always touched by the stories that come along with it. Till now in this Christian DVD, his relationships have been in a bit of trouble now that he and his wife have somewhat become estranged from each other. Fellow detective, Shane, is constantly encouraging him to take the time and reconnect with her.

Next, we have Shane McInerney, the latest addition to the team. Shane is very bright and has so much knowledge when it comes to technology and systems. Her thinking is very logical and she helps the team to find practical solutions to every problem. Shane has a knack for helping put back what is broken and managing relationship situations as well as she loves hearing people’s life stories.

Also in this Christian DVD, we have Rita Haywith. Rita is free-spirited and very creative. She is definitely the one who brings the calm and peace to the team when it is in fact much needed. One of the things that is very interesting about Rita is that she has a photographic memory which in fact comes in handy in this line of work. She can always see something and visualize it in her mind.

Last but not least we have the last member of the team from Signed, Sealed, Delivered: The Complete Series, it’s Norman Dorman. He’s very loveable and sweet which makes him very likable attracting everybody wanting to be his friend. He’s not a complicated person which makes him really easy to get along with. He adds the research part to the team as it is in fact what he loves to do. He has many connections and resources that help in every investigation the team tackles.
Every member of the postal investigation team has different talents and abilities that help the team become better, everyone is an important piece of the puzzle and without one of them, the investigation cannot complete itself.

In this Christian DVD, you’ll see the team encounter many different situations and help solve many mysteries. For example, the team discovers that the recipient of a letter is actually in jail. Oliver manages to speak to him and he learns that the man is wrongfully locked in prison and the letter the team has to give him may hold the answer for him to become free with his name cleared out. So the team makes this mystery a priority and work hard to get this man out of jail and clear his name. The four team members also discover that this man has a woman he loves and become separated from her due to the wrongful imprisonment. So now the team really has to give their all in their work to be able to successfully free him. As Shane, Oliver, Norman, and Rita find themselves getting involved in these stories, they’re own lives become impacted by them, for the better as they look into their own lives as well. Not only are they helping others but quite frankly they’re making themselves better.

Want to know what happens next with the Postables team? Want to see more stories? Check out the Christian DVD Signed, Sealed, Delivered: The Complete Series!

Here are other Hallmark’s Best Christian movies that I absolutely love and recommend:

All of My Heart DVD