Risen – The Resurrection story from a fresh point of view 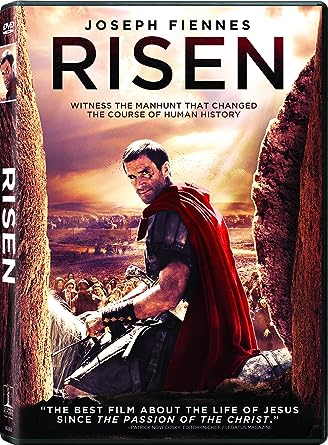 This is a Christian movie I recently watched and I was surprised I hadn’t seen it earlier when it came out. It touches the theme of Jesus’ crucifixion and resurrection but it focuses on the roman guard in charge to find Jesus’ body. It’s really interesting to see the story of Jesus’ resurrection but from another’s point of view.

Risen is set approximately in 30 AD and is about a roman soldier who is demanded to find the body of Jesus Christ after it is said that He’s resurrected and alive.
The film begins right at a rise triggered by Barabbas and Clavius the Roman soldier is in charge of stopping it. Later he is sent by Pontius Pilate to quicken a crucifixion that is in the middle of occurring. A few days later, three to be exact, Clavius is given the assignment to clarify the rumors about the risen Jesus. In that moment Pilate sends him to find the missing body of Jesus who was crucified indeed three days before. By sending Clavius to do this he wants to calm the inevitable revolts happening in the area before the grand Emperor’s arrival. Clavius is not successful in finding the body of Jesus so with the help of his right-hand man, Lucius, he intends to find the disciples and get information about the crucifixion and burial to get leads on what would’ve been the reason for the disappearance. Clavius and Lucius find several clues and they certainly soon discover that these clues are filled with miraculous content and they are quite hard to grasp as the truth.

In Risen, some of Jesus’ followers like for example Bartholomew and Mary Magdalene to Clavius seem to be speaking in riddles trying not to disclose others involved. Soon Clavius’ methods of getting information out of people become of disturbance to everybody, here including Hebrews and Romans. This creates pressure in Pilate knowing also about how Emperor Caesar would react so he distances himself from the situation. Up to this point, Clavius is running low on clues and goes back to see the Roman soldier who was in charge of guarding Jesus’ tomb. The soldier, now drunk, is not in control of his words and slurs out the truth that he had covered when Clavius first interrogated him. The Roman soldier begins telling Clavius that the morning when Jesus’ body had disappeared, there was some kind of blinding light and with that, the rope and stone that was securing the tomb broke apart. That someone appeared alongside a loud, majestic voice which caused him and another soldier to basically run for their lives. The Roman soldier explains that he had never seen or experienced something of that manner. After hearing what the drunken soldier had to say, Clavius is not really convinced since he assumes that the story he had just heard was an effect of drinking. He continues to investigate around but cannot find useful information.

In the midst of an attack in a Jewish area of rule, Clavius surprisingly sees what it seemed like a resurrected Jesus reunited with his apostles in solitary quarters. Clavius is shocked and he decides to cancel the search. He dismisses his soldiers and advises them on places they cannot enter without telling them about his encounter with Jesus himself. At night Lucius and Pilate themselves lead a raid to attack the same buildings Clavius had told them not to go to in and turns out they were empty. Clavius had left a note informing them that he wanted to pursue the investigation alone. Clavius makes the decision of leaving the Roman religion and their god Mars and joins Jesus and his disciples. There he begins a journey that will determine his true reasons for joining them. Jesus and the disciples help him and Clavius forms a friendship with them, specifically Peter.

Pilate from Risen is sure Clavius has betrayed him and now sends Lucius, now promoted to Clavius’ previous status, to find him and Jesus. Knowing they’re probably looking for him, Clavius helps the disciples to get around the Roman soldiers. On his trek with the disciples and Jesus, Clavius is a witness of Jesus’ miracles and his ascension to the Heavens. Now as the disciples are split up to take the Word of Jesus to the world, Clavius says goodbye to Peter.

What I think is most impactful about the Christian movie Risen is the 360-degree change Clavius made because of Jesus. Observing this we are reminded of Jesus’ power to transform anyone.

Here are other film suggestions about Jesus:

The Passion of the Christ DVD