If you own a dog, or have ever owed a dog in your lifetime, Hachi is the perfect family DVD for you.  Most people who have ever had a dog as a friend know their unconditional love, their companionship, and their loyalty.

In Hachi, you meet a Professor, Professor Wilson played by Richard Gere, a man who is an empty nester with a grown child, and a comfortable life. A life settled down and at an age where life was to be calm an easy. You would say, not a time in life where you get yourself a new puppy.

Well, getting a new puppy was not the intention of Professor Wilson, but when he discovers an abandoned puppy on his daily route home at the train station, he didn’t have the heart to leave it there. So, bringing it home to a wife opposed to the idea all around, Professor Wilson prepared the dog for the one night he thought that he would have the dog, thinking he would find it a home in the morning.

As I am sure you can see where the story is going, this one night didn’t stop there, and Professor Wilson soon became the proud owner of this new puppy. The puppy soon became his companion and after learning of it being Akin, gave him the name Hachiko. 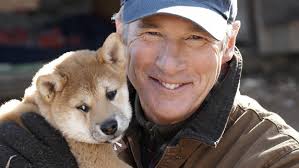 Hachi became a part of everyone’s lives. People at the train station counted on him to be at his daily post at the exact time his new owner would return. He became not only a part of their lives, but a joy in their lives.

I will have to leave the it there, because I do not want to spoil the movie for you. But what I can tell you is that Hachi is a brilliantly written story that shows the unconditional love, companionship and loyalty that a person has with their pet dog. I would even go as far to say that this DVD shows a glimpse of the same unconditional love and loyalty that God has for us, and the companionship that God desires with each of us.

Based on a true story.