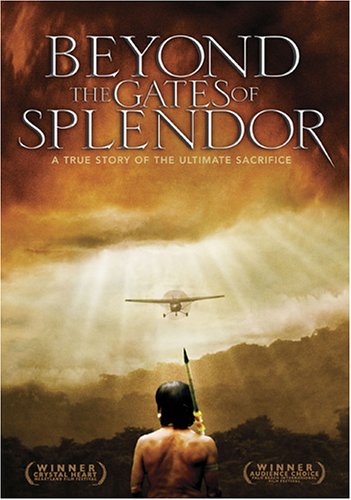 This Christian DVD is actually a documentary which holds a very powerful true story. Recently I’ve rediscovered my appreciation and love towards documentaries not only because of their form but also because of the stories they hold. This one is no exception to what I’ve mentioned here.

Beyond the Gates of Splendor tells the story of five missionaries who were martyrs of the gospel in the 1950’s as they died at the hands of a dangerous Indian tribe and the acts of reconciliation that occurred after.

At the beginning of this Christian movie, there’s some backstory about the Waodani tribe and how they were beforehand. This specific tribe had a history of being extremely hateful and violent. They took the lives of people always by spear. This was their only way of law, if someone did something wrong, they would be punished by spear. They didn’t have an organized system that would indicate who was guilty and who was innocent and there were no minor or major punishments. They would find “justice” by spearing and quite frankly this caused many innocent people’s deaths. And like I mentioned before, this tribe was known for being quite vicious and violent.

In the mid-1950’s five missionaries headed to the Waodani tribe’s area to speak the Gospel. At first, everything was going well but one day there were some communication problems and a tribe member mentioned something about the missionaries that was not true. The missionaries were killed but held onto their faith till their last moments on earth. Each missionary left behind their family members heartbroken but they chose to do something that is quite remarkable, they did an act of forgiveness towards the tribe.
We later know in the Christian movie Beyond the Gates of Splendor of Rachel Saint and Elisabeth Elliot, Rachel was the sister of one of the victims and Elisabeth was the wife of Jim Elliot. Since their loved ones were killed by this tribe, their work stopped there and spreading the Gospel had to continue so Elisabeth and Rachel could not just do nothing. These women knew that the Waodani people had a long way to go but they knew that these people could be transformed. So these courageous women did what not too many people would consider a smart thing, they moved to where the Waodani people were and lived among them, the same people who sacrificed their loved ones. Of course, this wasn’t an easy decision for Elisabeth and Rachel and they were human, they had extreme fear. But they also had the peace of God knowing He was there with them. They could’ve chosen to hate the Waodani tribe since they were the ones that took the lives of their loved ones and changed their lives forever but they decided to forgive. They chose to live amongst these people and get inside their hearts.
Rachel and Elisabeth from this Christian DVD arrived at the village of the tribe and all of them were quite shocked. The tribe members knew who they were and they also knew what they had done to their families. They knew that even though killing by spear was considered normal amongst them but it had greatly affected these women. Elisabeth and Rachel began their work amongst the tribe and continued what other missionaries had started and in a short amount time, the Waodani tribe was showing change. The women from Beyond the Gates of Splendor exuded grace, love, and peace, they showed God’s love and showing this is the way they impacted the people of this village. Eventually years after these women moved to the village, the death by spear rate among the Waodani came down drastically all because of the love and faith they gave others.

It’s amazing the story of these women presented in this Christian DVD and how they went the extra mile. They could’ve just forgiven the Waodani from a distance but no, they chose to leave what they knew behind and live amongst these people to finish what their family members had begun. What courage! It really was a difficult decision to begin with. I love that even though this documentary shows their decision to live amongst the tribe even though they had killed their loved ones, the film also shows the road to that decision.
To know more about this story you can purchase the Christian movie Beyond the Gates of Splendor at the Fishflix store!
Here are other Evangelistic movies that are considered quite impactful:

End of the Spear DVD