Beverly Lewis’ The Reckoning – Following your heart to love 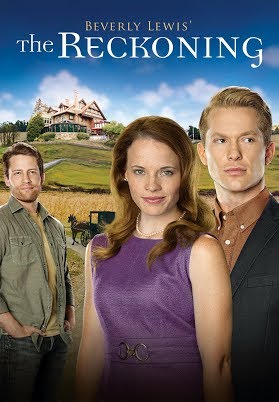 The Reckoning is the third and last installment of “The Shunning Series” movies which all have been part of the Hallmark Movies & Mysteries movie lineup since 2011. If you don’t know this series is inspired by best-selling author Beverly Lewis’ book series called Heritage of Lancaster County. I personally haven’t read the book series but after watching all three movies, I plan to do so in the near future. I recommend watching the previous films, The Shunning, and The Confession so you’ll know the main character Katie’s full story and her transition from being Katie Lapp to now being Katherine Mayfield. Her world and environment have completely changed since the first movie so to see that transition is great before watching this last installment.

The Reckoning focuses on how our main character Katie Mayfield although living in her mother’s estate, longs for her previous Amish way of life on the meanwhile Daniel Fisher, her long lost love is trying to find her.

Quick backstory, in the first movie, The Shunning, we meet Katie Lapp who makes the decision to leave her Amish community when she discovers that her parents she had lived with her whole life weren’t her birth parents. She had been adopted but when she finds out she had English parents (“English” meaning not from the Amish lifestyle), questions begin circling her mind. Now, in the second film, The Confession, Katie leaves the Amish lifestyle and begins to find her birth mother. She finds her mom but learns that she is suffering from a life-ending disease. So Katie stays with her until it’s time for her passing. (The Confession is my favorite movie from the series.)

In The Reckoning, Katie’s biological mom has recently passed away. Now Katie has inherited her mother’s beautiful estate and has begun her life there. She has grown accustomed to the English lifestyle and world, quite setting aside her Amish upbringing. Since Katie left the Amish community, it is a rule for her previous family not to contact her or speak to her. Sad, isn’t it? She tries to keep on going and pretend it doesn’t affect her, but it deeply does.

Katie (played by Katie Leclerc) is now living a pretty good life with all she could ever want. She has a great job, and she is engaged to a very wealthy businessman. Katie has a deep love for him, not just because he represented wealth but he had several things in common with her and the life she had chosen to live. Her future seems very clear, marry her fiancée and continue their life as they’ve been living it but her Amish roots creep up in her mind when Daniel, her first love appears and wants to win Katie back. Back when she was in the Amish community, it had been said that Daniel had presumably passed away and seeing him now alive definitely made an impact. Now two men are vying for her love and now she’s extremely confused. Old feeling she had felt for Daniel begin to reappear and continues to love the man she’s engaged to. She has to make a decision that will truly make her happy.

Katie begins to realize that she can’t dwell on the past, that she must continue on towards the future. She is very comfortable in the English world and now she won’t quite fit in the Amish lifestyle so she chooses to marry her fiancée. Of course, this breaks Daniel’s heart but she urges him to move on. But marrying an English man was going to create additional tension between her and her adoptive parents. She realizes that since her parents are still sort of upset with her original decision that they might not come to the wedding. Even though it would be going against what they believe, Katie hopes they will make the exception to attend that special day. Even though it has been a while since Katie chose to leave the Amish lifestyle, she kept holding on to her faith as it leads her and guides her while living in this new world that she’s now in.

Now, the question is, Will her parents come? What will Daniel do? Will Katie ultimately marry her English fiancée?
You must see The Reckoning to find out! You can find this movie and the rest of the movies from Beverly Lewis’ trilogy here in www.fishflix.com!

Love Finds You in Charm DVD