Anne of Green Gables: The Continuing Story – The third installment of this movie series 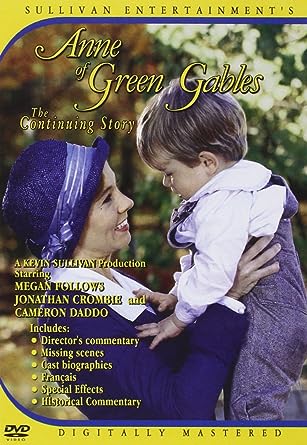 This Christian movie is the last installment of Megan Follows as Anne Shirley. Anne of Green Gables is definitely considered a television classic and tugs at the heartstrings of young people and adults. One of the things that I find interesting about this Christian movie is that it’s set through the time were World War I was taking place and you can see the effects of that specific war.

Anne of Green Gables: The Continuing Story tells the story of how an adult Anne returns to her town of Avonlea yet joins Gilbert later on in New York where she works at a publishing house and there she encounters some strife.

At the beginning of the Christian movie Anne of Green Gables: The Continuing Story, we see how Anne returns to Avonlea after spending some years teaching in Nova Scotia. She heads to Green Gables where she basically grew up but the place has deteriorated as if no one has been taking care of it and this upsets Anne as she has a special place in her heart for this place. In this Christian DVD, Anne is engaged to Gilbert Blythe and he’s been in medical school but is reunited with her. While together in Avonlea, Gilbert mentions to Anne his desire to move with her to New York since he has been offered a job position there. She agrees and finds a job in a publishing house.

Now in New York, Anne meets a writer named Jack Garrison. Immediately Jack sees Anne’s talent and the huge amount of potential that she has so he offers to verify the manuscript she’s been working on. He promises to publish the manuscript but there’s a catch, she has to include his name in the manuscript as well. The idea of having her manuscript published is basically a dream come true so Anne agrees to Jack’s request but little does she know that he is trying to take advantage of her. The manuscript is indeed accepted but later Anne hears that Jack presented her manuscript as if it were completely his and did not even mention her name. Jack is bad news so she decides to cut any contact with the man but to her surprise, later on, he declares his love for her.

How is Gilbert doing? Well, he began a new job in a hospital. He quickly notices that the majority of the doctors are only focused on obtaining fame and money instead of focusing on saving lives. This makes him feel disheartened by the lack of integrity in the hospital only grows. This wasn’t what he had imagined for New York to be like so he and Anne return to Avonlea and plan their wedding.

Now during this time, Anne and Gilbert from Anne of Green Gables: The Continuing Story have settled down in Green Gables. Soon there are rumors of war so men of Avonlea are enlisting to serve their country. Gilbert decides to enlist in the army as a medical officer but before leaving for the war he convinces Anne to marry him. Soon Anne hears the news that Gilbert has been declared missing in action so she decides to volunteer with the Red Cross in hopes of finding her husband. While there she is met with Jack Garrison, Colette, the woman he’s presently with, and a son named Dominic. Since he’s involved in dangerous things, he asks Anne to take the woman and their son to safety. She agrees but when Colette passes away, Anne is left with little Dominic.

Anne from Anne of Green Gables: The Continuing Story continues on her search for Gilbert which leads her this time to Paris with Dominic in tow. There are no leads to find Gilbert but soon Anne is reunited with Jack and he expresses how he longs to start a family with her. But Anne knows who her heart belongs to and declines the man’s offer as she later continues her search for her husband. Soon, Jack’s involvement in shady things catch up to him and dies so now little Dominic doesn’t have a family. Anne promises to take care of him as if he were her own.

But now, will she find Gilbert? Did he survive the war? Make sure to find out the answers to these questions by purchasing the Christian DVD Anne of Green Gables: The Continuing Story at the Fishflix store!

Here are other Love and Romance content for you to watch: