A Horse Tale – How strangers can become family 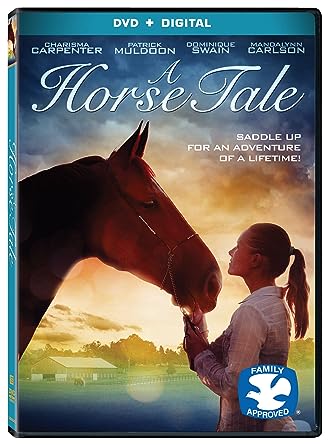 This sweet Christian movie tackles the theme of getting to know strangers who later on become friends who later on turn out to be family as well. Also, I love that horses are involved in this movie! I’ve recently discovered a certain love for horses and I’m completely fascinated with them. Like what they represent and their grandiose way they were created.

The Christian DVD A Horse Tale tells the story of how Michael Thompson, a high-strung accountant is given the job to help a family in saving their stables now that the bank is threatening to shut them down. Even though he’s not very happy with the job he looks for ways to save this family’s heritage and along the way finds things he’d never expected to find.

Michael Thompson from A Horse Tale apart from being an accountant he’s a father, an overprotective one that is. He’s continuously protecting his daughter Chloe and constantly looking to keep her well-behaved but is definitely struggling to do so. He’s a single dad now and doesn’t quite know how to raise his daughter and notices a separation between them continually. Soon a small disturbance occurs in Chloe’s school and he decides to take his daughter along on his business trip. Both of them head to a horse farm that is soon to be shut down by the bank. Michael hopes that this will be an opportunity to have some bonding time with his daughter along with working and helping the family of the farm in keeping their stables. Chloe is extremely unhappy to be forced to go to a farm with her dad. To Michael, this is another job, just like any other. A place who’s failing to keep their books in order and who needs help to avoid being foreclosed. This mindset about the farm begins to change as both Michael and Chloe start learning more about the farm and the family. They begin forming relationships with the owners and now the place is more than just the farm to them. Michael is all in on the farm and trying to do everything he can to save the farm from closing.

At first in this Christian movie when Michael arrives at the farm he checks out the owner’s books. He quickly notices that they’re incredibly unorganized and in need of much fixing. Michael immediately begins to do everything he can but he fears that in the long run it won’t be enough and the farm will still end up foreclosed. As he continues to work, Michael feels the pressure as the date set by the bank to foreclose is getting closer and closer. Also not helping is finding his daughter upset because she didn’t want to be there in the first place plus some owners of the farm are not very keen on having Michael on the property. Now is the time that Michael must work his hardest to help the farm stay afloat and not go under.

While on the farm, Michael meets Samantha “Sam” Harrison, one of the women that run the farm alongside her sister and father.
Sam’s family is quite fine with the arrangements made to have an “outsider” from the city help save their stables but in her case, she’s not very happy with it. In fact, Sam is very upset and is in complete disagreement in hiring someone from the outside to help them. She is sure that they can help the farm themselves and that they don’t need Michael’s help. But as Samantha spends some time with her dad and starts to get to know him, she takes a liking to him. Michael feels the same way towards Sam and this encourages them both to work together, all differences aside, and help save the stables.

Michael and Chloe from the Christian movie A Horse Tale are soon considered family as they continue to help the farm in any way they can. But the date for foreclosure is as close as it was and the question arises. Will they be able to raise enough money to pay the bank? Will they be able to save the beloved farm? Will the relationships formed overcome the pressures?
This film holds a great example of the important meaning of coming together and working together to achieve a goal.

If you’d like to know if the farm survives, make sure to get this Christian DVD at the Fishflix store!

There are a few Christian drama films that involve horses in their storyline, Here are some I recommend: