Torchlighters: The Martin Luther Story – a man that sought the truth 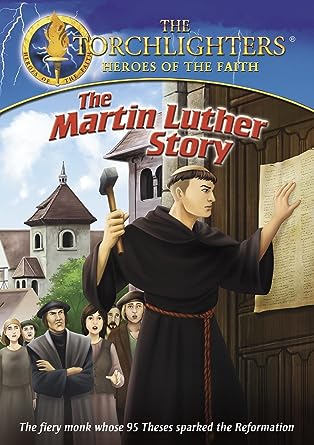 The story of Martin Luther is quite remarkable yet somewhat difficult if you think about it. So I love that Torchlighters found a way to explain the story to kids in a simple way so that they can understand but not holding back to its true story. If you’re not at been for Martin Luther we probably wouldn’t have a lot of things that we know today about Christianity.

The Christian DVD Torchlighters: The Martin Luther Story is about a monk who wrote the 95 Theses that began the Reformation. The world was being led by the Catholic Church and all it took was one man and paper to begin change.

During the time of Martin Luther, the Catholic Church was the leader of the region but this man had different ideas that went the complete opposite to what the Catholic Church stood for. And the thing is that Luther did not hold his tongue regarding those topics, he believed what was right and couldn’t just stand there and watch people being taught a false doctrine. Like I mentioned before Martin Luther’s ideas were completely different from what the Catholic Church believed in. For example, he believes that salvation came to a person through God’s grace and because the person had faith not because the person did a lot of good works. You came to this conclusion when the Catholic Church began giving away indulgences but they were selling them for a huge amount of money and supposedly when a person would purchase it would reduce their time in purgatory. Also a person’s “sinner’s debt” could be pardoned they would give their money to the church buying indulgence. This could be for the person’s personal soul or for the soul of a loved one. And this could be for the person’s personal soul or for another person so basically, everyone was following the church’s authority and truly believed they were following what is right.

Luther from the Christian DVD Torchlighters: The Martin Luther Story, had an important role in the Catholic church so he knew what was going on behind closed doors. He saw that those in leadership were led by money and power and quite frankly did not care about the people. So he had to do something. Martin Luther began researching and going over the doctrine of the church and there he found some things that he was completely opposed. Also saw the rules that weren’t there were being used to benefit the leaders in many ways so the deception that he was seeing was devastating to him. Speaking out would come with grave consequences for him but he had to let the people know.

Later on in this Christian movie, Martin Luther took some nails and posted 95 Theses on the doors of the church. This document spoke about how he was opposed to the church and they showed the differences between what the leaders were speaking to the people and what was truly said in the Bible. When the theses were posted on the doors many things happened. The church was extremely mad and we’re against Luther. Since they knew they were wrong, they felt guilty and their anger was turned to Martin Luther, therefore, they attacked him. Even though it was difficult for him to go through this he knew that these were the consequences that would await him. But seeing how Luther was so vocal about his beliefs the people around begin to see the truth. They were paying for indulgences that would give them nothing and that those weren’t going to save their souls. This angered the people and soon enough a revolution began led by Martin Luther himself.

He didn’t have any idea that the Reformation would begin, he just wanted to speak his mind and inspire people to follow the truth. People loved him and loved that his ideas were aligned with the Bible encouraging them to speak up about their beliefs as well.

Kids can learn so much from this Christian movie and they too can become inspired to always speak the truth and to speak up when the truth isn’t being spoken about correctly. Torchlighters: The Martin Luther Story can be seen not just by kids but adults can watch it with their kids as well.

To learn more about what this Christian movie has to offer, make sure to purchase it at the Fishflix store!

Here are other Torchlighters material ideal for kids: